I traveled with Photography Club members to Branch Brook Park in Newark, NJ. It was so large, we didn’t even walk a quarter of it for the time we were there. The weather was a bit bitter and extremely windy, but it was still a great day to take pictures. Autumn is my favorite season and the trips as well as these photos remind me that winter has not yet come, even though everyone’s already hyped for Christmas. The trip was also with some pretty awesome company. Pretty much anyone who comes on these trips becomes my best friend (even if they don’t know it), because they are keeping my club alive and are making my efforts to plan these events worth something.

So now’s the time where I stop rambling about my grandparent-like hopes for my child of a club and actually start talking about the entire purpose of making this blog in the first place: my photography.

The photo below is a tricky one–it makes you think I actually went through the tunnel. Well, running through it would have been tempting, but I passed it instead. I was having a tough time getting the light and dark to balance in this shot, because underneath the bridge is so dark versus the sun being so bright. I keep thinking the black in the photo is a bracelet; it makes me want to put my finger into the screen to try it on. I hope you see it too or I’d feel more ridiculous than I already am.

The image below was result of me testing out my lens settings to make sure they worked well with the lightness outside. I did not realize until looking at these images after that this specific frame includes all of these colors, the primaries plus green, an unintentionally classic autumn shot. 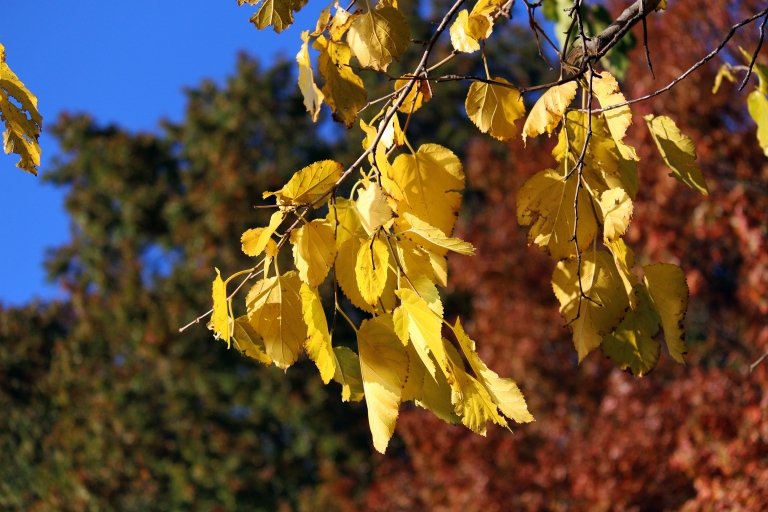 I think this one turned out nice. I took quite a few images of the fallen leaves in the water to try to get it just right. Whether you agree or not, to me this is just right. I was bending over the water and as much as I try to make any photo straight when I am leaning, I continuously fail at it. Then again, for this photo I think the angle makes it more original and interesting to look at. Also, the complimentary colors here was definitely unintentional. I feel like my favorite parts of my images from this trip have to do with the unintentional effects.

Now that we are just in a couple of photos, you probably already notice how much I love leaves. Well, if you don’t like them, you might be disappointed with the rest of this post, but if you like them, expect that the leaf images keep falling underneath this one and to the end of this post. Did you see what I did there? That pun might have been a tad forced.

Yes, I had to take a picture of the ducks. There were quite a few of them swimming around. Pretty cute, I know. 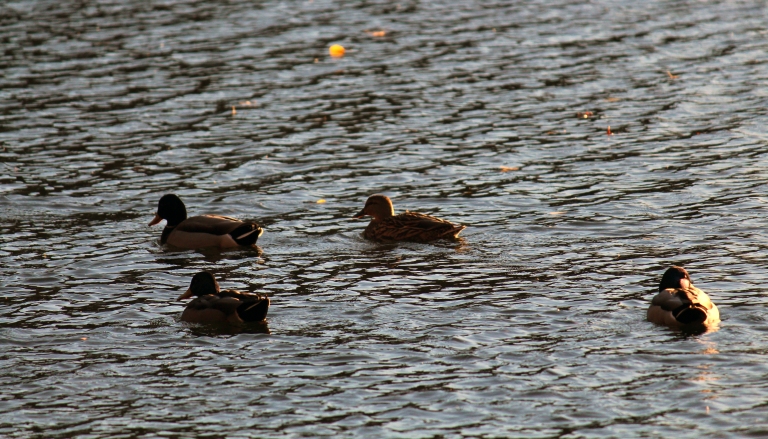 MORE LEAVES! If you don’t like it, go leave. Just kidding, don’t leave. I just wanted an excuse to use that pun. I wish I have more to say about these shots of leaves, but truthfully there isn’t so much to say other than that I find them beautiful.

I will say this: the photo below is my favorite from this trip. The shadows turned out awesome, the colors were on point, and overall, I think it would be a pretty screen saver. 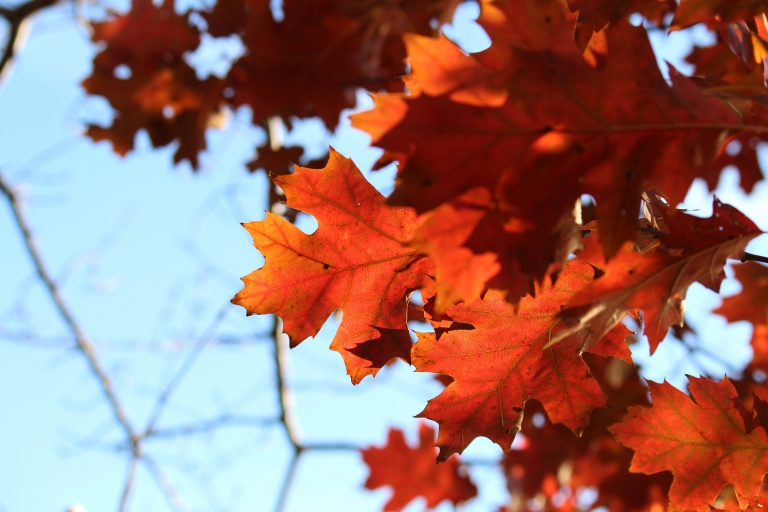 I thought with the way the branch was placed with the sun’s positioning, the shadows seemed to dance a little across the different leaves. 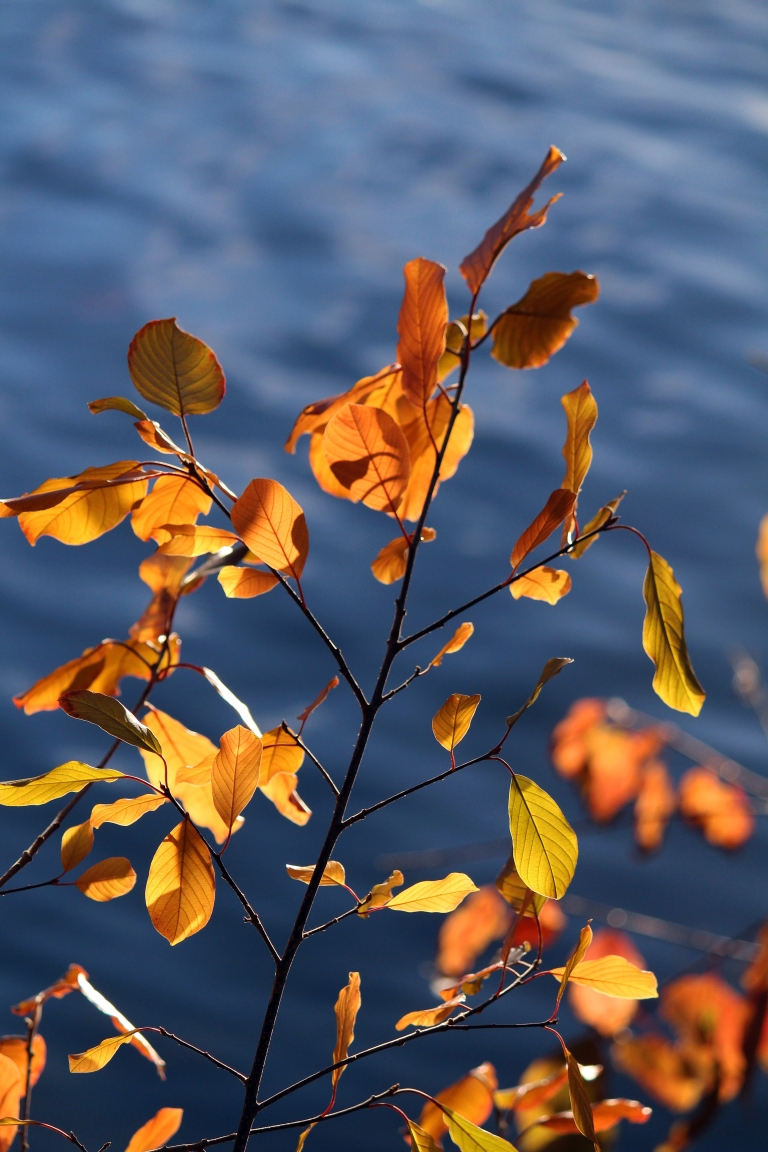 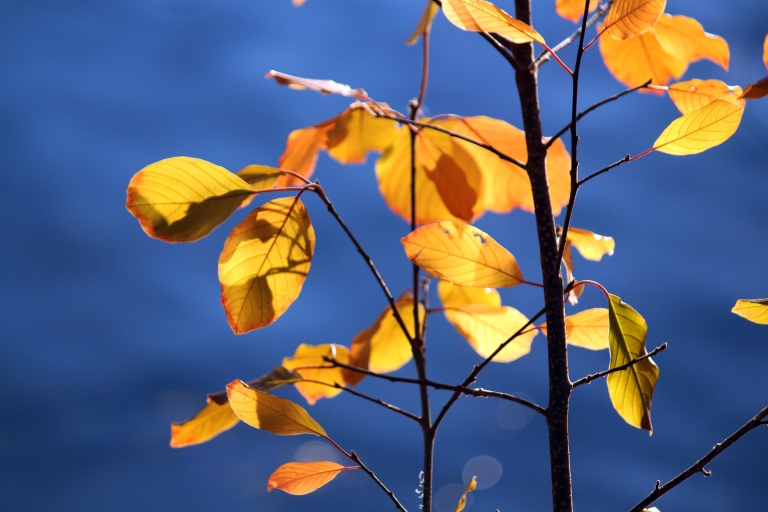 Okay, prepare. Here starts the bombardment of the fuzzies or at least a fun way of putting it. I took lots of pictures of this type of plant. Those fuzzy plants you see in the image below were just about everywhere and with the wind blowing them, I thought they looked extra pretty. Black and white suited it I think.

I thought this was a pretty silhouette. It contrasts well with the water and the branch itself is pretty interesting.

Hey look, a close up of a fuzzy. It looks super fluffy up close, but if I were to touch it, it probably might activate my seasonal allergies. Therefore, I opted out. If it weren’t for the allergies though, I can assure you that I’d be trying to cuddle up right to them. I thought the textures looked pretty when close up. Especially because I have so pictures of this type of plant, I may as well capture its entire scope, both close and far. It only makes sense.

Similar to the tunnel image, with this one I was having difficulty capturing this photo’s color and detail without being too exposed or too dark. To be honest, I am still not extremely satisfied with it, but I thought it might be worth including for the sake of its favorable composition.

Fuzzies! This is just another black and white shot of them. I swear, I can be original. I just happen to think the black and white looks great with them and helps capture their contrast more. 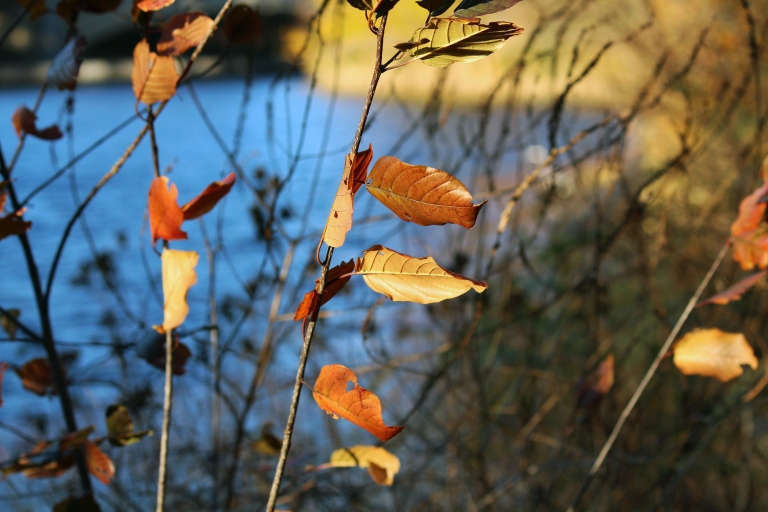 I have to say it, but I have no idea if that was dust on my lens or the actual moon. If it’s the moon, I think the unintentional effects must keep getting better and better. I definitely did not see that when capturing the shot in the lens. I think the fuzzy looks like a mini tree here and I really like that. 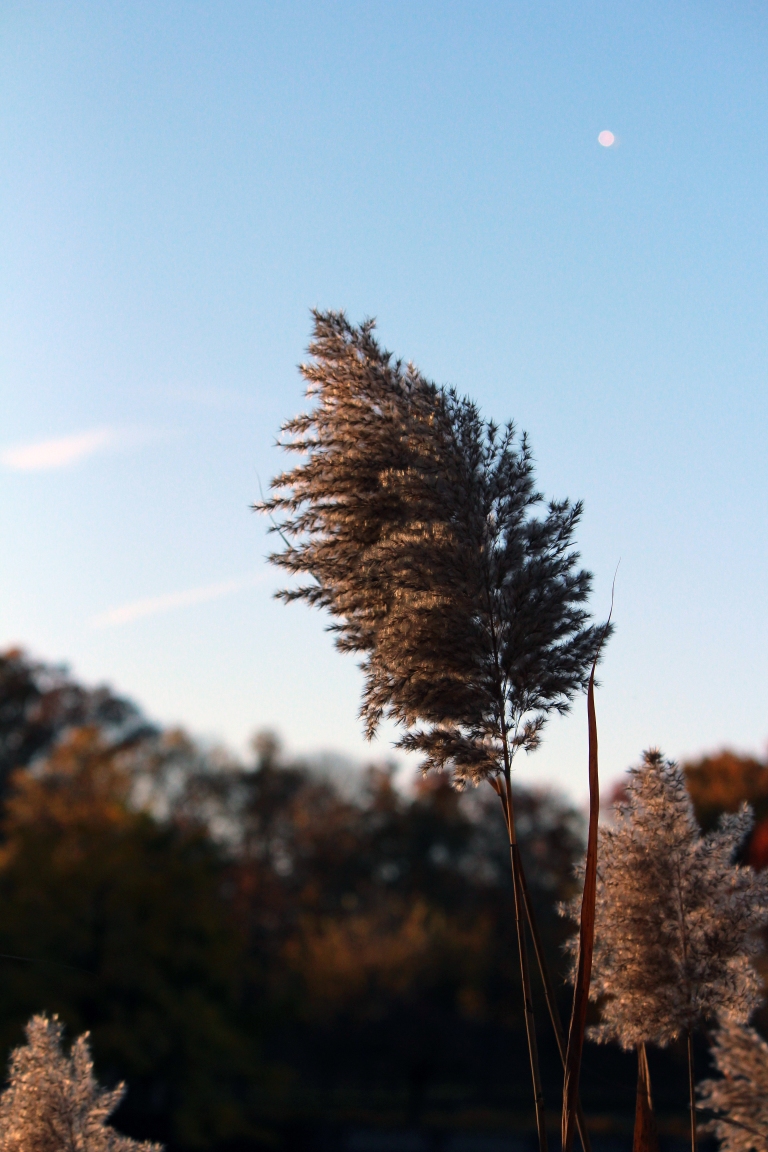 Mini trees of fuzzy. I like this composition a lot.

Below are some random berries. I think this photo looks a tad too Christmas-y in the midst of these Autumn shots, but I still like it. The berries look like mini cranberries, but don’t worry, I wouldn’t know whether they taste like them. I know better not to eat strange berries…ish. I may or may not have eaten strange grapes out of the university garden in the past. No shame. They were nasty. Lesson learned. PSA: Never eat strange berries.

I usually try to avoid the sun when taking pictures with my nice camera for the purposes of protecting the lens as my third eye, but this one turned out pretty interesting. The leaves ended up being some really pretty filters for the Sun’s rays. 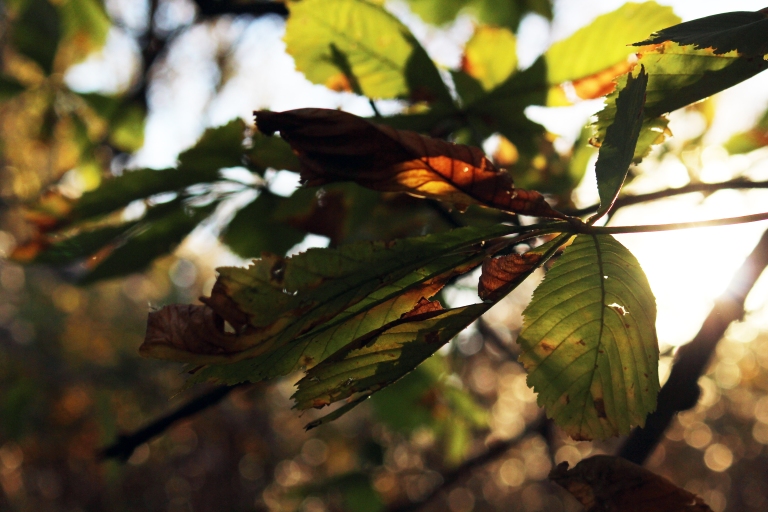 I thought these leaves looked like they were rusting.

I absolutely love the image below. I attempted several times to get a picture of the fuzzies with the light from the Sun outlining them. None turned out nearly as lovely as this one. Mission accomplished. 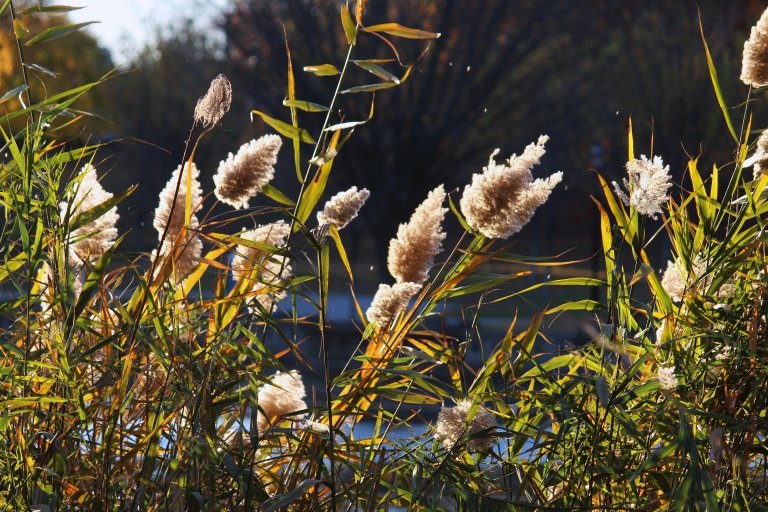 For the two photos below, I was mostly interested in the reflection from the fence in the puddle. That was what persuaded me to take these photos. In the end though, the rest outside of the puddles turned out pretty great too. 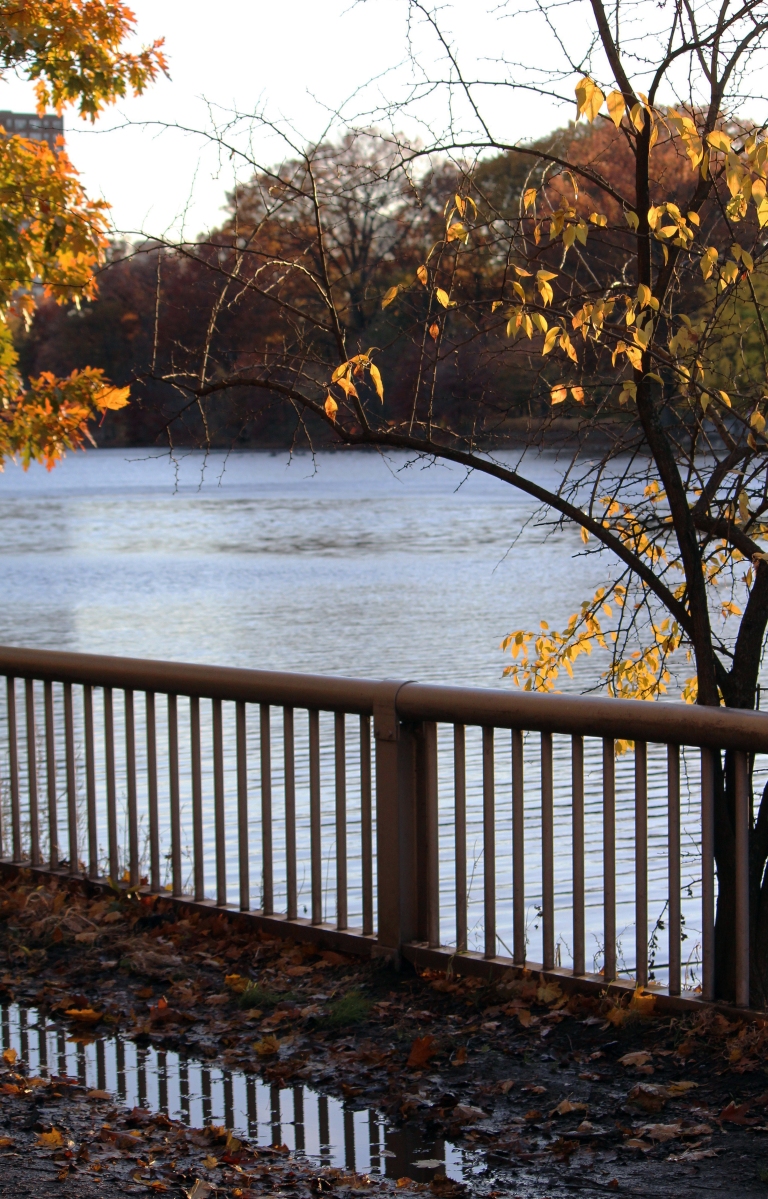 The photo below is of everyone’s shadows from the trip, excluding myself. I was too lazy to take off my zoom lens, which is why my shadow isn’t there. I promise I’m not a ghost or pigment of imagination; I do in fact have a shadow. 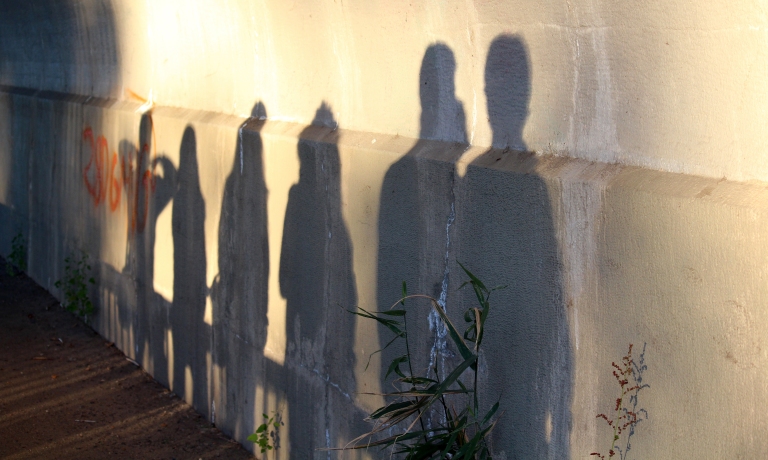 I don’t know that girl, but I’d say she can’t be recognized enough for me to be arrested for taking a creeper shot of her. I just thought she made the composition here much more complete. Not gonna lie, with the dark hair and bright pink backpack, she reminds me of Dora the Explorer. I appreciate how this photo turned out though.

This just reiterates the fact that this park was HUGE. I think this photo turned out a tad dark, but I do like how the darkness brings the viewer to look at the contrasting red/oranges in the trees and blue in the sky and water.

I went underneath this bridge, a much larger bridge. 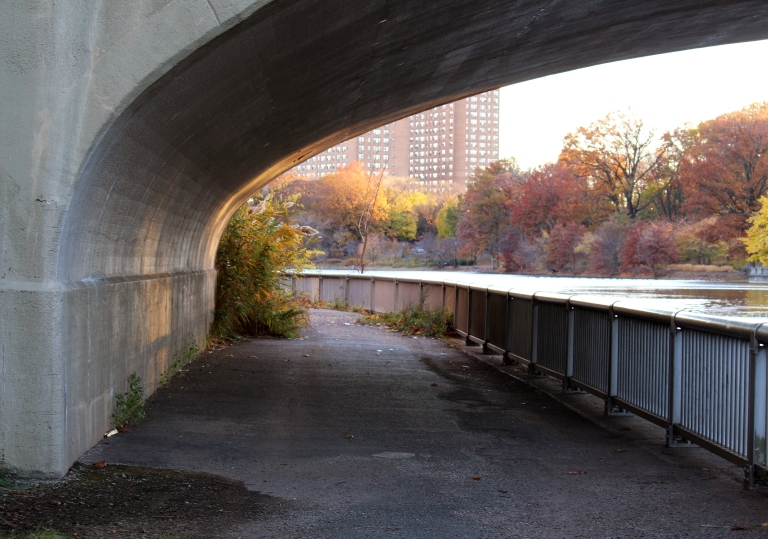 Leaves acting as filters for each other can make a photogenic photo. Example below:

What do you think?