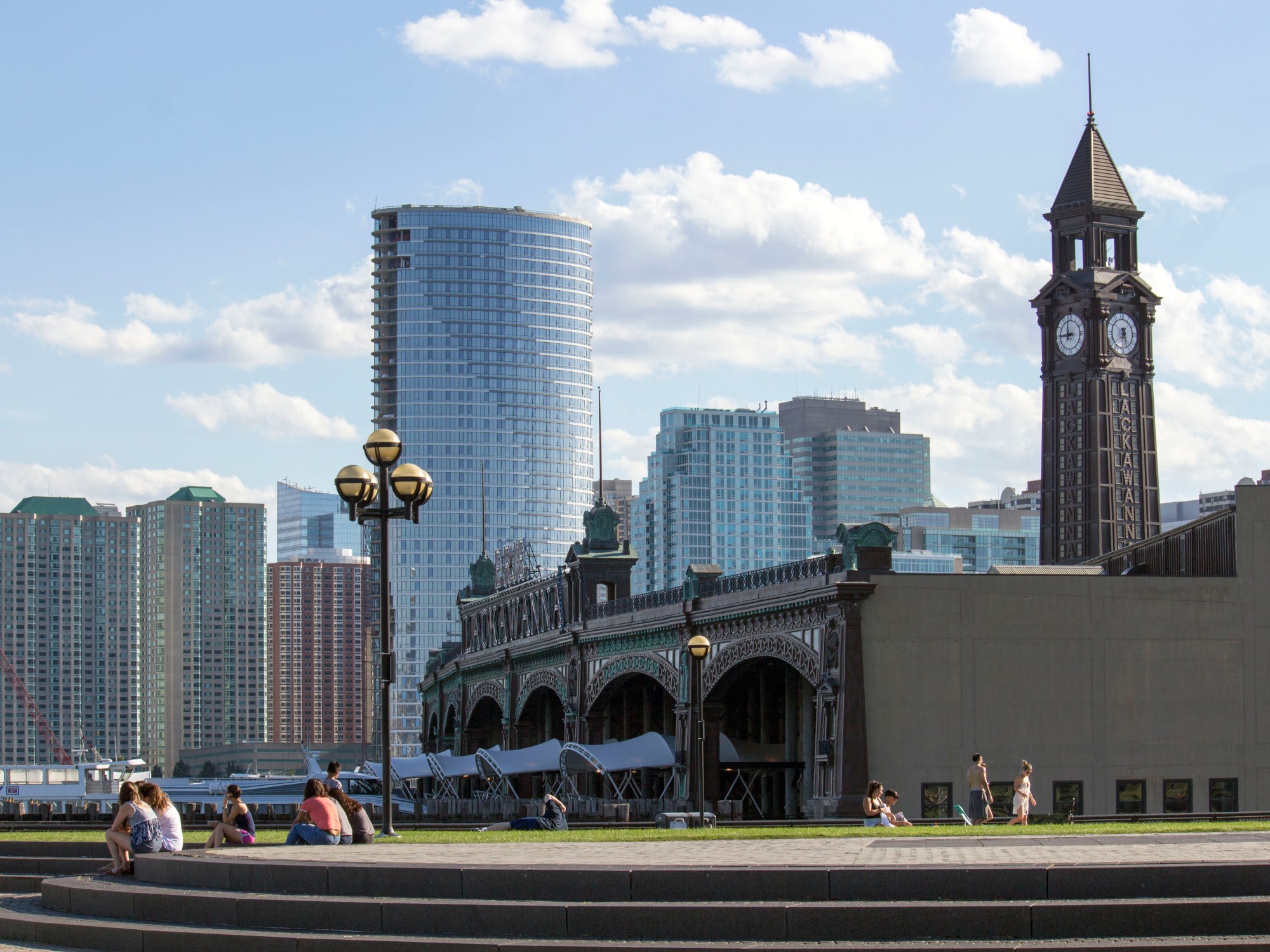 Hello readers/viewers! On Saturday, June 24th, I took a mini road trip to Hoboken, NJ. I have edited about half of the photos and there’s quite a bit of them, which is why I decided to separate them into two posts versus the usual single post.

This trip was pretty random. Greg told me we should go to Hoboken, that it was a 20 minute ride from his place, and I said sure. That’s the extent of it. Simple, except the fact that it was a 40 minute ride from his place, not 20. I was bitter for about 2 seconds, but it really was an enjoyable trip with great food and weather, two of the most important components I keep in mind when going out to take photos. First spot where we took some photos was by Mitsuwa, a Japanese marketplace, then we drove to Hoboken. (I’ll notify you when it switches to Hoboken)

Below is something you might recognize, ANOTHER plant picture. Greg says they all look the same, but I don’t really care. I love plants and flowers and yeah, they don’t really have much meaning to them other than “hey look, it’s a pretty flower”. Flower/plant pictures usually cannot make you feel something, but still, some part of me still enjoys taking them. It’s a comfort thing I guess. Noting that, in the future, I definitely hope to push myself to try out new techniques and types of photography more.

Moving on, here’s pictures of a duck. He’s pretty cool. He (or she, but I’m going to call it “he”) let me take pictures of him and even posed for a while. In the first photo, I love how a drop of water is hanging off of his beak. I know he’s posing and all, but it makes it look like he’s trying to pose less. In the second image, I appreciate how the duck’s body blends with the rocks in the background. I know I could have used effects to help separate him from the back, but I feel like the shot encourages the viewer to look a little closer. 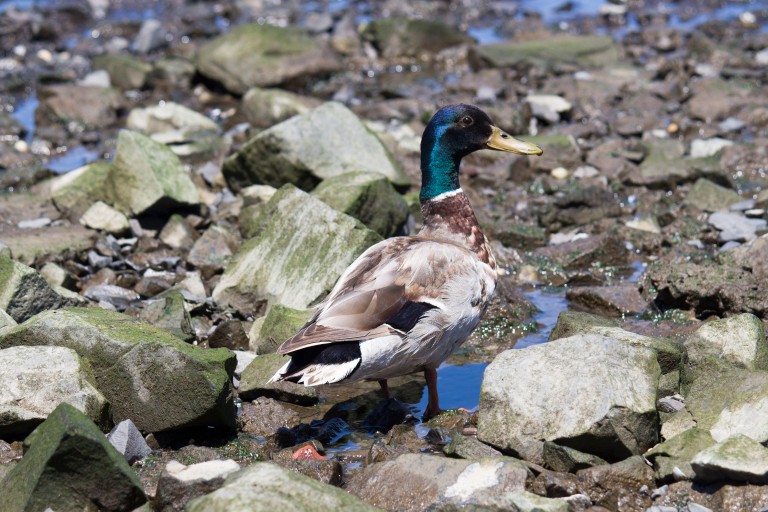 Below are a couple Geese. I would say that they were pretty cool, but part of me was terrified of them. They were too comfortable with me than my liking. We couldn’t really take shots of them for long until they started getting way to close and “begging” for food. If you don’t know, I hope it stays that way, but Geese are pretty darn mean. I hope in the images I took of them, you do not see the mean side of these animals, but see them in a more peaceful light.

I definitely am not the biggest fan of Geese, but I happen to really enjoy the photo below. Maybe it’s the angle or just the Goose’s expression, but he (or she) seems to be either curious or lost. I also like the reflection that the puddle provides.

The shot below isn’t particularly well-taken (a little blurry in spots), but hopefully it gives you a sense of the setting. In the foreground where I am walking, it is relatively calm and empty, while over the river, New York City is sitting there, quiet-looking too, but much more cluttered.

I must admit, I do like reflections.. and the fact that it looks like that guy’s head is emerging from that girl’s leg.

The river was polluted quite a bit. There was even a lot of wreckage like pictured below. I’m not sure if anyone ever plans on cleaning any of it up, but if there’s any benefit to it, it probably has become a part of the habitat for the fish and creates an interesting visual effect. Part of me, though, is sympathetic towards the animals that have to live with it. 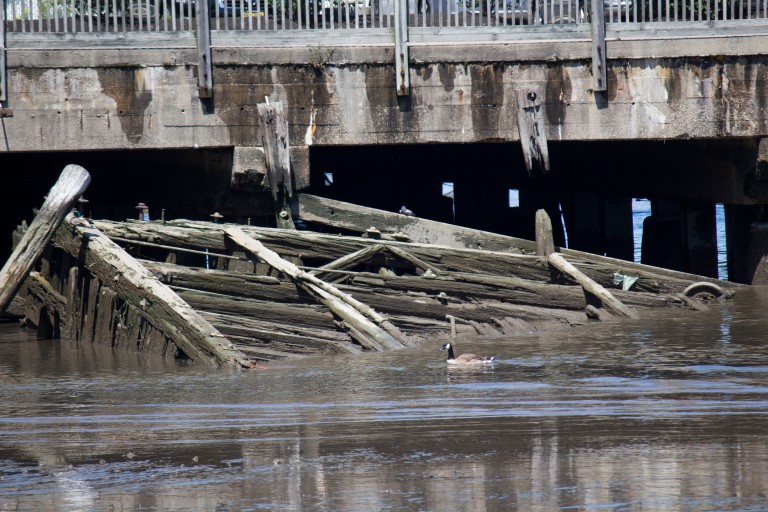 There were some cats roaming outside one of the buildings. I figured they were probably pets to whomever lives in the building (or works?). They seemed to love the bushes though, which was cool. I like cats.

I thought this wreckage provided an interesting reflection in combination with the city’s reflection.

The flowers below looked nearly identical to cotton candy in my opinion.

This photo (easy to predict) is one of my favorites from the trip. 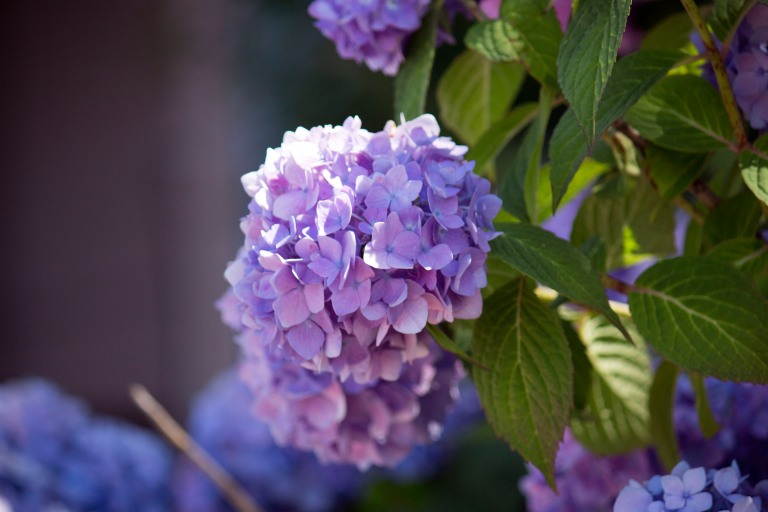 I have NO idea what this man was doing. At first, I thought he must be fishing, but where’s the rod? To be honest, I’m not sure if he would perceive this to be a compliment or not, but he looked SO much like Rocky Balboa (Sylvester Stallone if you’re not familiar with the Rocky movies, but you probably should be).

Here we are, Hoboken. I thought this might be a cool shot with my mom’s car and the city in the background. Do you see the empire state building? It’s not every day, that your care gets a close-up with such a famous building.

From the top of the parking garage, we saw some pretty interesting views, including some bikes lined up in a row. 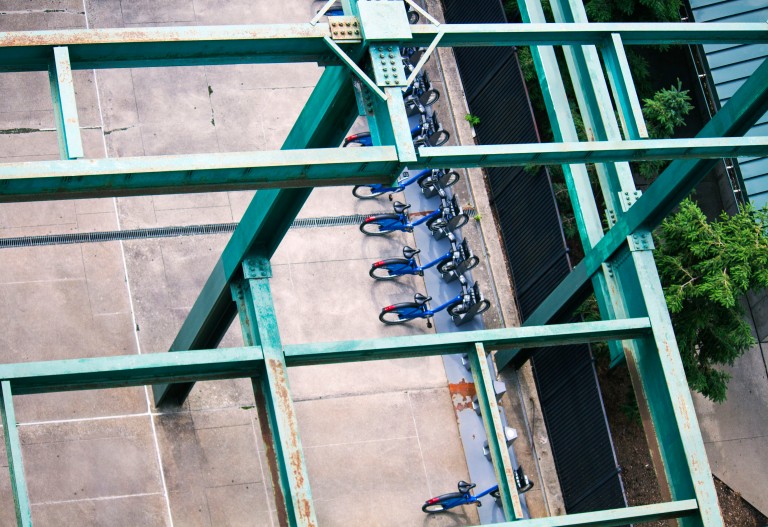 Oh, and you know, a clean shot of a “pretty famous” building. No big deal.

Down back on the ground, there were more flowers for me to take pictures of.. Yay! 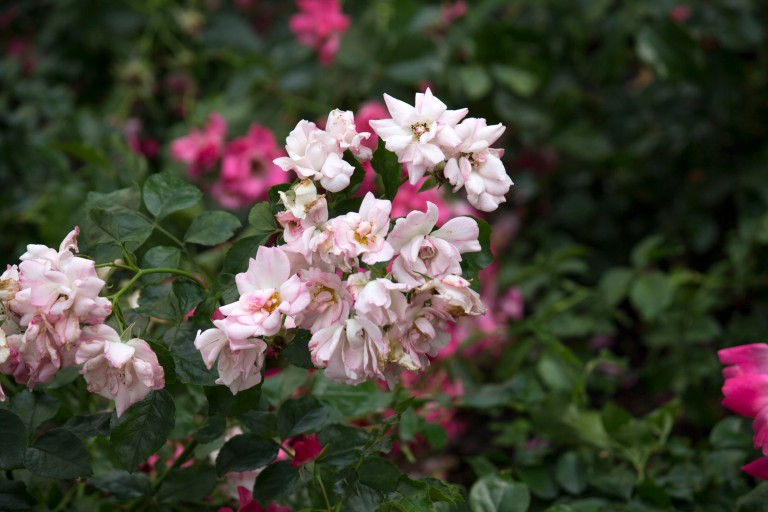 My shots make it look like where we went was empty, but I think I was just lucky with these shots, because it was not.

The shot below didn’t turn out as clear as I hoped, but I’m sort of obsessed with this plant so you have to deal with it for the 0.5 seconds it takes you to scroll past this picture. 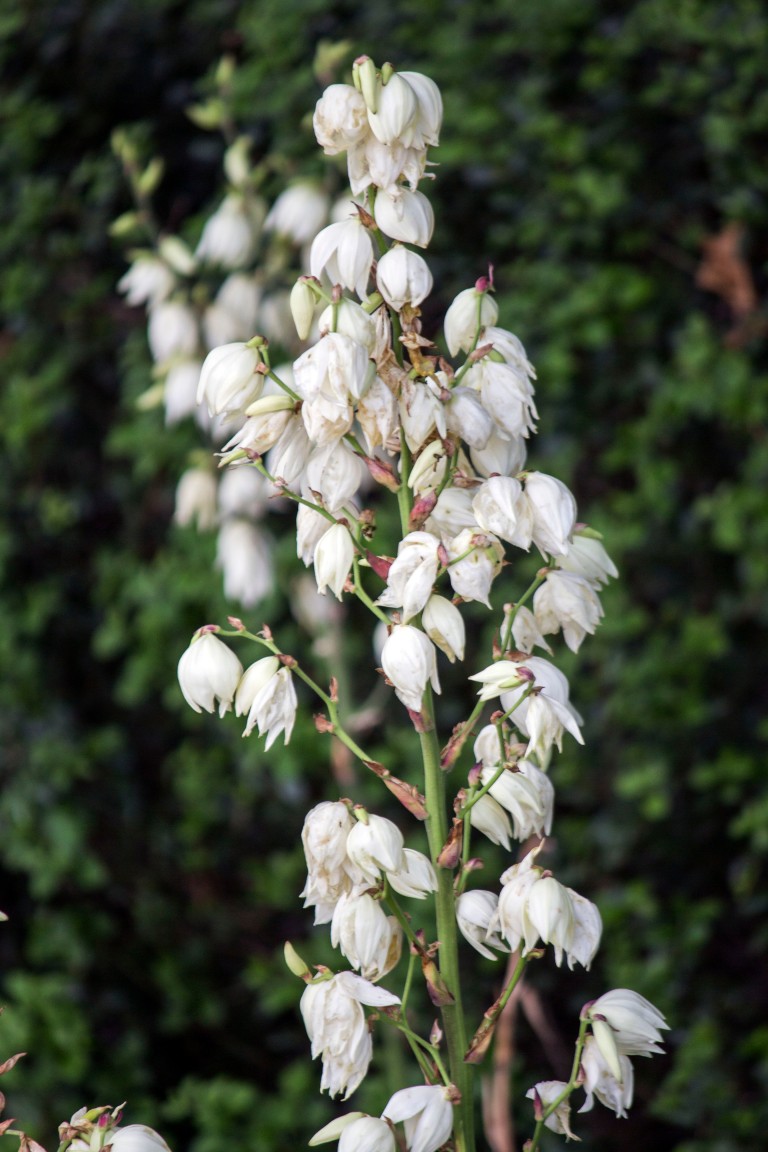 Throughout our walk, we passed through the train station in Hoboken. I thought the tunnel and the way the light was peaking through looked nice at the time and I still do, don’t get me wrong, but now looking at it, the shot sort of looks like one of those angsty teen pictures where the train tracks represent the struggles of life or something.

The building had such interesting architecture, but it was JUST the train station. It was sort of disappointing to associate the two. 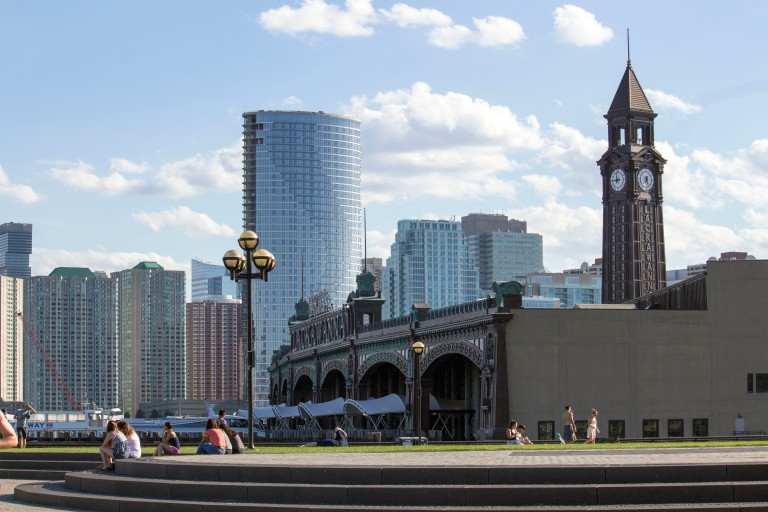 To end part 1 of the Hoboken trip, here’s some shots of a guy playing guitar. Seems pretty basic, but he wasn’t just playing guitar, he was playing jazz. I can’t say I’m the hugest fan of jazz, but I will say that he did a pretty phenomenal job with it for a street performer. 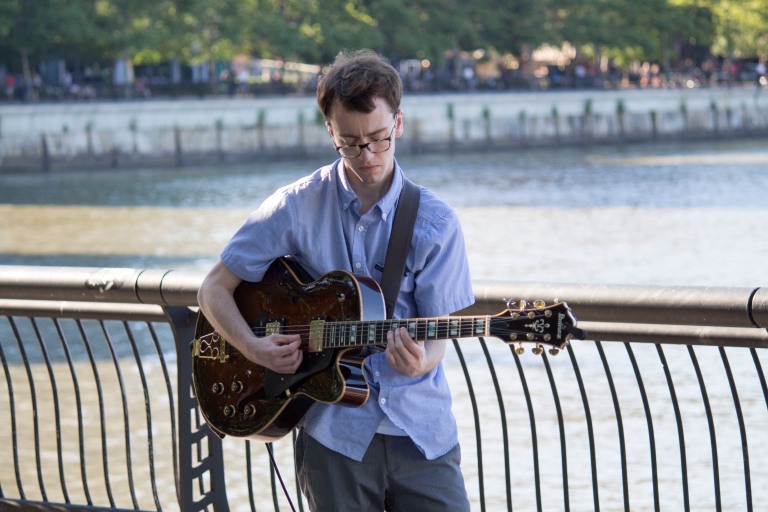 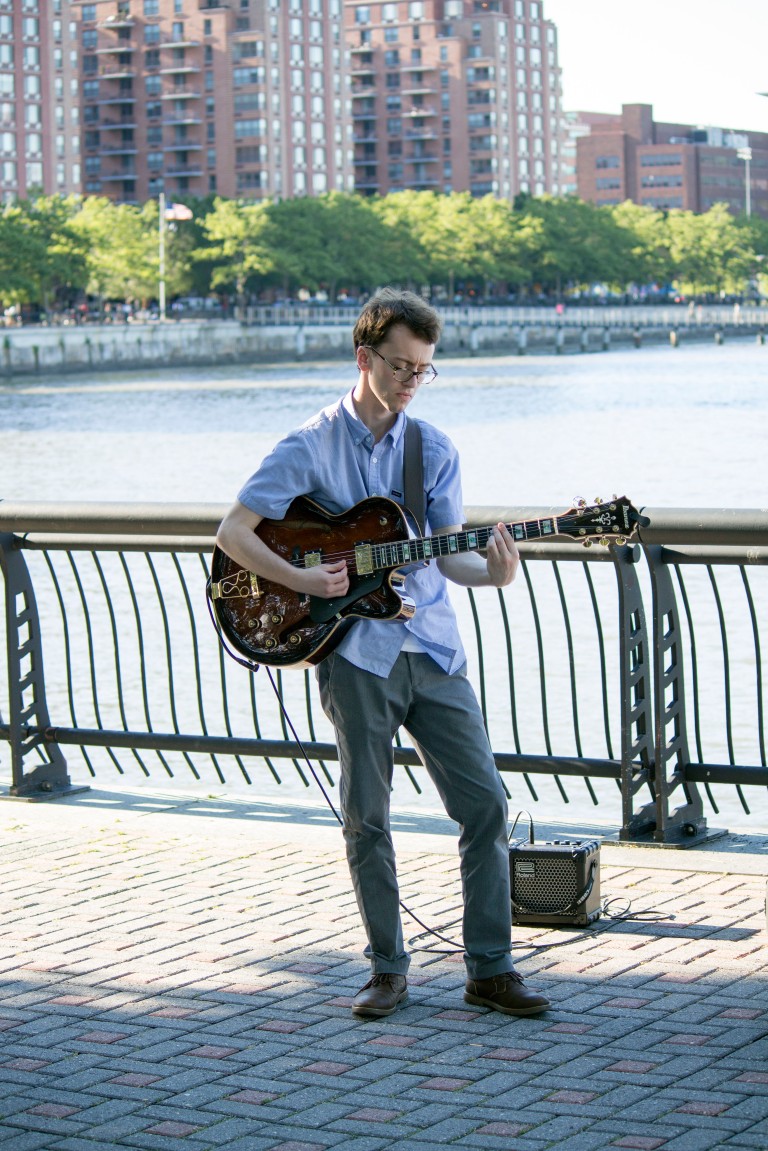 I would say “That’s all folks”, but it’s not. Stay tuned for part two coming soon! I hope you’ve enjoyed these thus far.