Hello friends–next update: Rhode Island. I traveled up here a couple weekends ago, but unfortunately things have been to hectic for me to post so forgive my brief absence. I will give a little update at the end of this post.

We (my mom, Dan’s mom, me) first traveled to Providence, then Newport, and then back to Providence (to spend time with Dan’s sister who worked at Brown this summer). Though I will say the bulk of these images were taken in Newport.

We went for a brief walk near Brown University and throughout this walk, I was able to capture some of the quirks in this city.

Right here the vines were growing on the building and across the window, which I thought was extra unique. 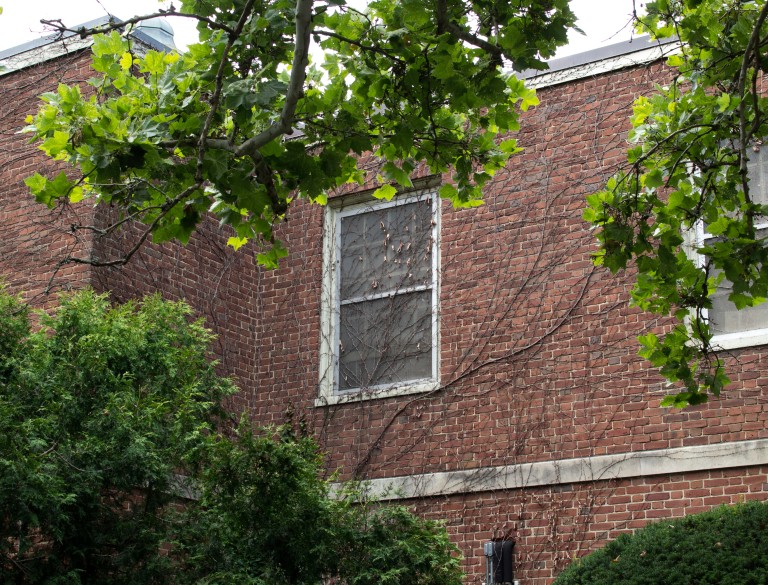 So now we are in Newport–don’t worry, you will see more Providence shots at the end of this post.

We thought it would be a great idea to walk down what we thought would be a relaxing cruise on Newport’s cliff walk by the mansions. We thought the cliff walk would consistently be a little walkway like you see in the image below, but we were mistaken. We walked miles on the half of the path that was primarily cliff and rocks. Therefore, when I speak about the cliff walk in this post, read with an emphasis on the CLIFF.

There were lots of fences separating the properties from the pathway of the walk. There were plants of all shapes, sizes, textures, and colors winding down the entirety of the path. This particular plant framed itself nicely in the fence. 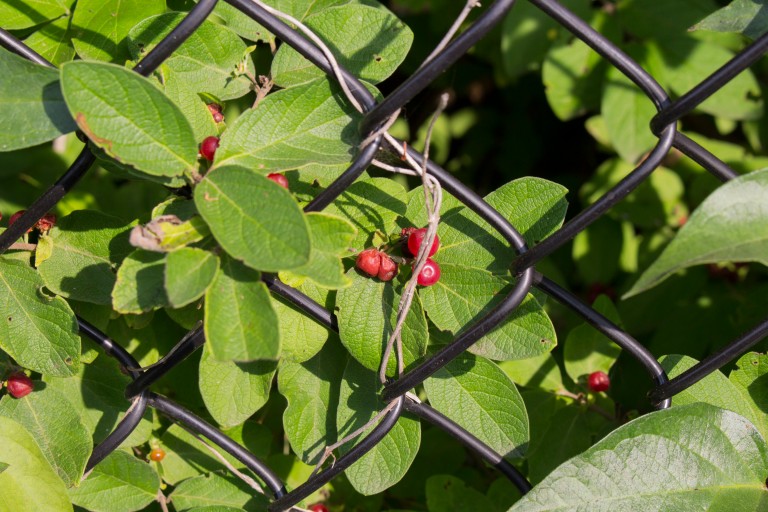 There were so many rocks in the water and they often created a beautiful composition.

This house. WOW. Whoever designed it, whoever lives in it.. I’m jealous of them. The design was so interesting and somehow to me it looks like a gnome cottage in the way it is designed, but it manages to do that while being a mansion. Wow. Plus, it was extra beautiful with how it contrasted against the sky with its shades of oranges. This may be my favorite shot of the little trip, especially because the environment frames the home. 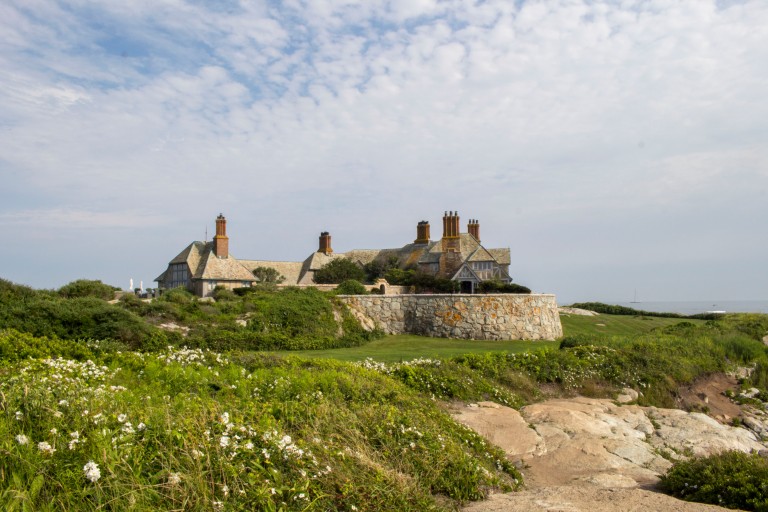 There was some random guy chilling on the rocks so I took a picture of him. From what it seemed, he was super tall, but in this photo, he’s super tiny, which puts a fun little twist on that. 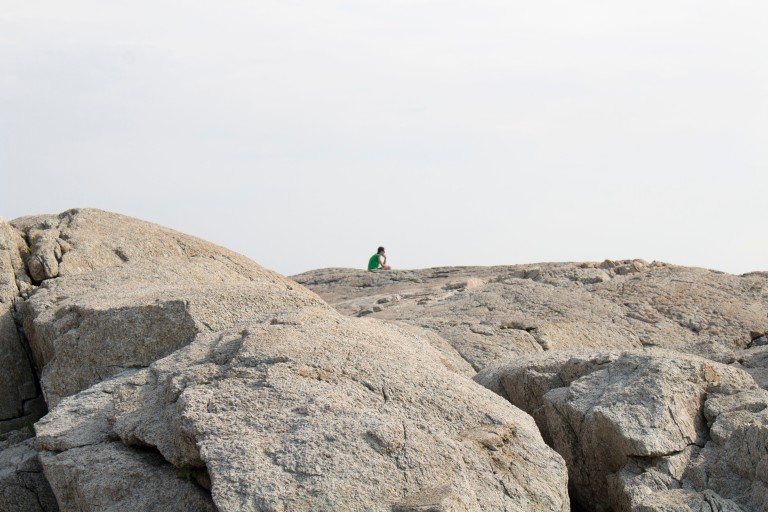 As a part of the walkway, there was a little flower.. and we all know how much I love plant photos. 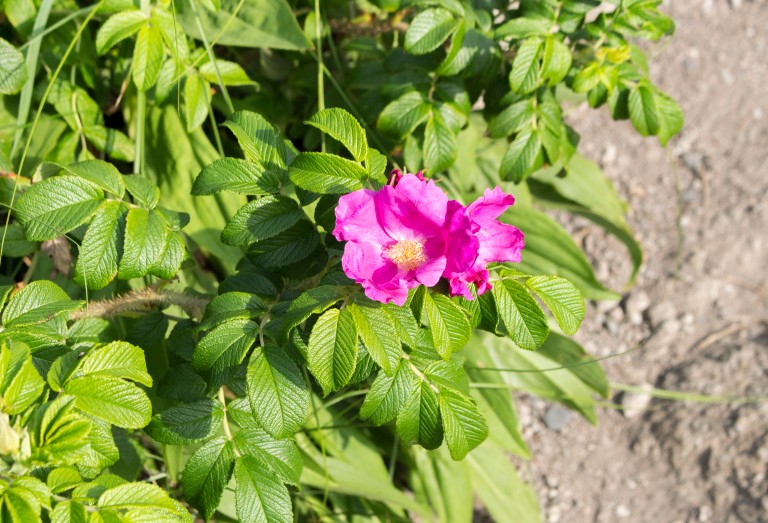 Of course I had to take another shot of this home. It was too interesting not to. Also, the clouds were shaped in a way hat they looked like smoke coming out of the chimney. It was pretty memorable.

The image below has a peaceful vibe about it that makes me smile when I see it.

Below is an interesting and aging plant that I saw. I like how the relish-orange in the leaves contrasts the green in the leaves and the blue in the water.

There was a period where the cliff ended and became a walkway for a little while (emphasis on “little while”). The cliff started again where this image ends.

The water wasn’t necessarily clean-looking like on an island, but it’s cool and refreshing breeze made me want to jump in. It was an especially hot day.

I found this cute little lock on the fence. It looked weathered and like it stayed locked through a lot. Whoever locked it in the first place should be proud.

These next two shots show some rocks in the water. Not only were they all beautiful with all their different colors, but they also made this interesting and satisfying sound as they crashed up against each other each time the tide went back in.

There were lots of little tunnels on the cliff walk. This one was especially adorable. It sorta matches that admirable gnome home I showed earlier in this post.

This was a bit a ways away from the tunnel after we went through the other side. 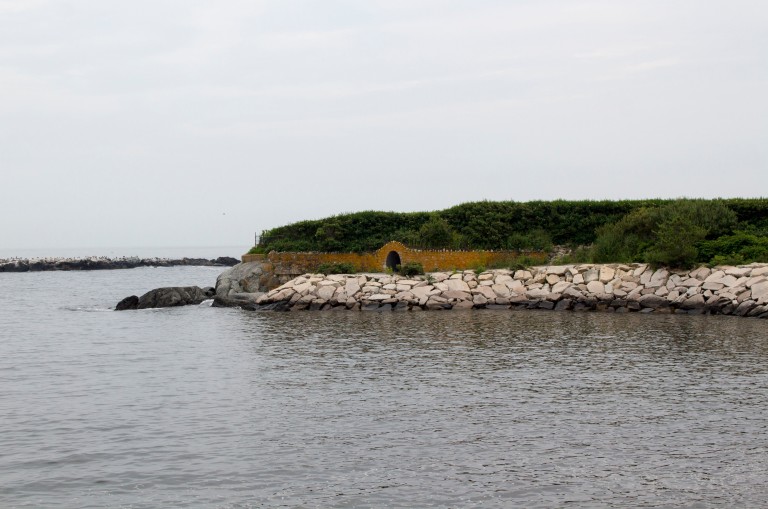 This flower was especially fuzzy looking, but I wouldn’t dare touch it to test that. 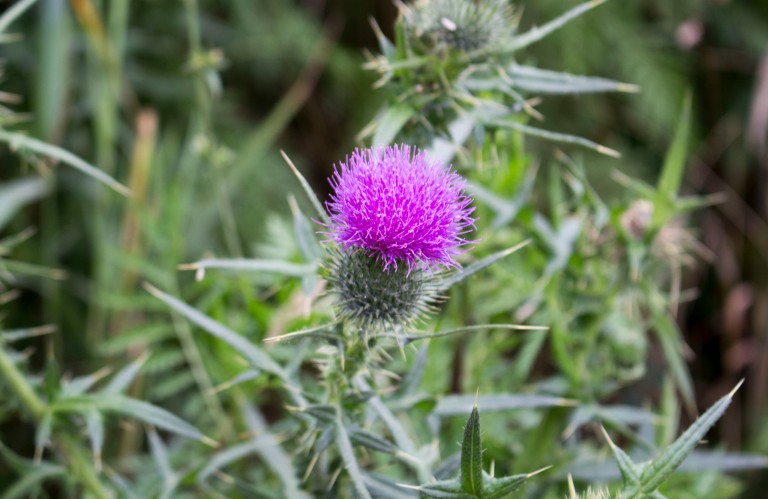 Another tunnel–not as adorable, but just as uncommon.

To remain consistent, here’s a shot of looking outside the tunnel. This one was much more deep, similar to that of a cave.

The tunnel shown above must have been to avoid this. It looks like Chinese architecture, but to be politically correct I am not going to make any assumptions. Nevertheless, it still felt out of place.. still beautiful though.

We passed a wall of leaves.

Soon after the photo above was taken, we stepped off the pathway of the cliff walk and ventured out to grab some dinner.

Walking to the restaurant, we passed some of the places in the images you see below.

This is simply just a lamp in a window, but it had an interesting old-fashioned flair to it. Plus the reflection made it much more interesting.

Looking through another window, I saw a cool reflection.

I thought this door looked so gentle and beautiful with the flower wreath.

Soo it s sorta funny, but I used flash and it totally terrified the guy in the window. It’s not every day you see a Del’s shop, but apparently it’s not uncommon enough that people regularly take pictures.

I thought this photo was needed. What would you do if pigs flew?

We traveled back to Providence to see Waterfire. Wow, it was amazing. If you don’t know what it is, basically it’s fire pits all across the river being lit. It seems relatively simple, but there are lots of other things too that get attention like little memorials. It’s really beautiful. 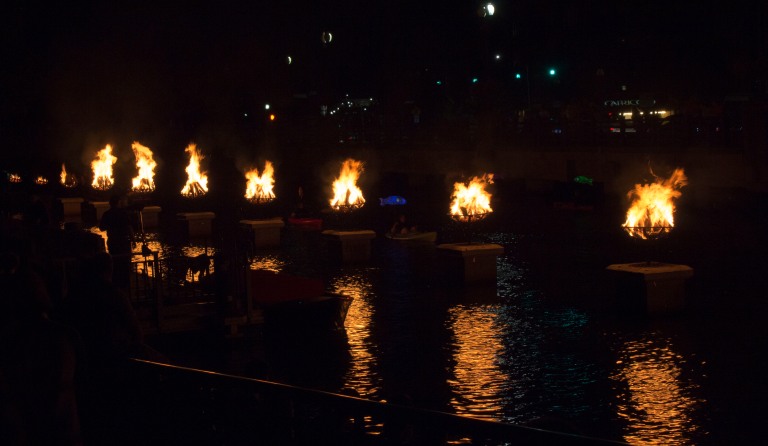 There were people in boars with these cute little fish lanterns on top.

One of the memorials had all of these stars everywhere with little bags where people could put notes. The stars were illuminating that blue/purple color and it was quite remarkable. This spot in particular had more crowded together, but there were many more strung in the trees.

As you can see below, the little bags illuminate an orange color. 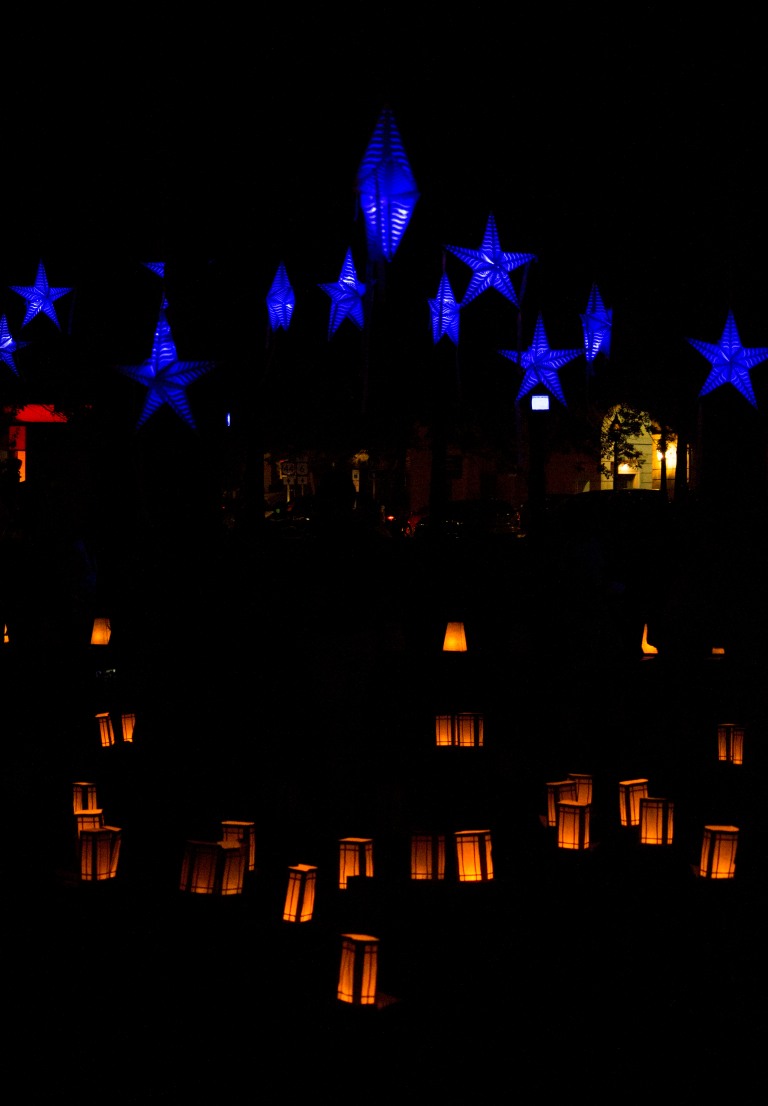 Thank you so much for viewing my blog post. Things have been insane, which has made it difficult to post. I feel like I always say that, but it couldn’t be more true.

2 weeks ago on a Saturday, I got an email asking me where my photograph was for the exhibition. It was for this art club in NYC, the Salmagundi Club. I applied to their non-member exhibition with a photograph of mine early this year and I never heard back so I figured the opportunity did not work out. I guess i did hear from them… a month prior. Their emails to me went to spam (thanks gmail). So anyways, they kind of needed my photo. I express shipped myself to the city the next day to drop off a framed version of my photograph. When I walked up to the club, I noticed my photograph was on the front poster for the exhibit on 5th Ave. NO BIG DEAL. I basically cried. Then during the first day of the 2 week exhibition, I get a call. My photograph sold. Wow. So I express shipped more and raised the price. I went back last Saturday to visit and make sure everything was in its place. I went this Friday for the reception. I couldn’t stop looking when everyone looked at my piece. I admired their facial expressions.. especially when I could tell they did more than just look at it. At the very end of the reception, I collected my piece and the extra and went to speak to the owner to thank him. He told me that someone bought my second piece. They saw it in the show, went home, and “couldn’t stop thinking about it” so called and bought it. My heart still skips a beat when I play over his words in my mind.

Thank you for everything.